As the UK heads into its eighth week of lockdown we hope you are all safe and well and keeping occupied with work and/or hobbies.

The National Trust has been working hard on plans to re-open its properties and welcome back visitors as soon as possible.  The email from Hilary McGrady (Director General) on Friday 7th May that we have forwarded to you gave details about this and included a video message to all volunteers.  We are eager of course to hear from all our local properties about when they might resume working with volunteer groups like ours.

You'll remember from the 'Keeping in touch - edition 2' email of 16 April, that we gave our safety glasses to Quality Care of Cheadle.  Well, since then Jenny, Tricia, Lisa and others (?) have made scrubs, gowns, visors and face masks for local NHS and care workers.  A brilliant effort by everyone! 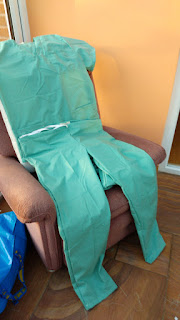 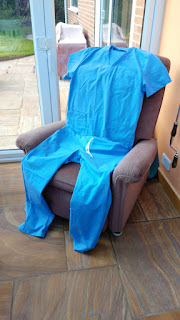 We hope you have had a good bank holiday weekend last week.  Unusually, the bank holiday was at the start not the end as we celebrated the 75th anniversary of Victory in Europe and remembered the fallen.  Some of us hung up bunting and had socially distanced street parties. 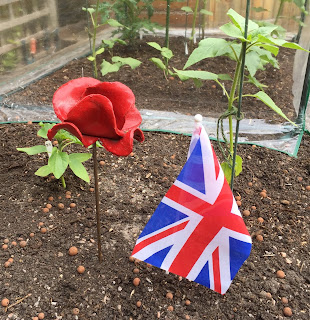 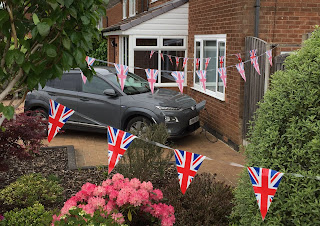 Finally, remember that we have a WhatsApp group for all of us to keep in touch during lockdown.  If you would like to be part of this then please send us your mobile number so we can add you to it.

Your MNTV Committee
Posted by Daniel Black at 05:21 No comments:

As the UK heads into a fourth week of lockdown we hope you are all still doing well, getting out as much as possible and enjoying the sunshine.  Please act sensibly when out for whatever your favourite form of exercise is.  Easter has been and gone and with it much chocolate we hope.  The group should be at Lyme this Sunday doing drystone walling.  Somehow the gods seem to be conspiring to make us wait even longer for this task as last year's storms in August put a stop to it then!

For a bit of fun and to make you feel like you have a good view to look at whilst you sit at home, here's a #ThrowbackThursday for you.  Looking through the blog from 2008 onwards we couldn't actually find a Sunday 16th April we had worked before, the nearest we could get was 2016 when we were away for Spring in Snowdonia 15th - 17th April when our task was taking up rhody saplings.  This particular weekend was when we also realised that it takes only 11 people to make MNTV great!  Here is the blog entry for this weekend: 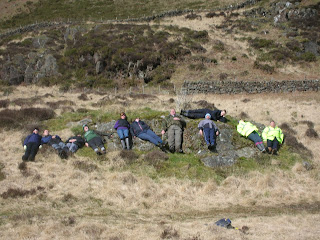 Just to let you know as long as Boris says it's okay we will be returning to Snowdonia for our annual Christmas weekend which this year is: Christmas in Cymru 4th - 6th December.

We also thought you'd like to know of a couple of things happening at the moment within the group.  Firstly, we wanted to show our respect and thanks to the NHS and Carers who are looking after the sick and vulnerable.  We can't all raise £14 million like 99-year-old Captain Tom Moore, but on having a clearout committee member Sue found some spare PPE which included some safety glasses which got her thinking ... MNTV isn't using its safety glasses at the moment and surely they could get some use as PPE so she took them round to Quality Care of Cheadle whose staff go into people's homes to care for them.  Owner Bridie was delighted to have the extra PPE, particularly the glasses because only nine of her 24 staff had glasses.  With our added extras there are plenty to go round.  She asked us to pass on this message:

I am so grateful that all my staff have eye protection.  Thanks to you all we will be in your debt!

I'm sure you will agree with us that it's the little thoughts that help.

Secondly, the AGM is nearly upon us and no you won't need to leave your house for it!  The AGM is coming to you.  Daniel will be in touch in a week or so with all the paper work.  If you have any questions that you think the group should discuss then please let us know, or if you have any questions yourself before or after the AGM then you know where we are, and please don't forget to fill in any paperwork and to pay your subs as they are due too.

Don't forgget, if you have any suggestions of what we could do for socials or where we can go then email your suggestions to info@mntv.org.uk.  Last time we wrote we sent you a quiz.  Unfortunately the answers never arrived so we are sending you another quiz (we think it's a little easier than the last one) with answers.  You can do this on your own, with your family or friends, over Skype, Facetime, WhatsApp or whatever social media channel you use.  Do let us know how you get on!

We also wanted you to still feel part of the group in these strange times, so have put together a WhatsApp group for all of us to keep in touch.  If you would like to be part of this then please send us your mobile number so we can add you to the group.

Your MNTV Committee
Posted by Daniel Black at 20:00 No comments:

We hope you are all doing well in this strange time.  As we are not volunteering at the moment we hope that this enforced stay at home is giving you time to work on your gardens and to get out and about for some exercise, 2 metres apart of course!

Before we had this enforced staying at home we had a team head to the Hesketh Tavern on 9th March for its weekly pub quiz.  We came 7th out of 20 - not bad!  We love our socials.  If you have any suggestions of what we could do or where we can go then email your suggestions to info@mntv.org.uk.

In the mean time get your thinking caps on because we are sending you a pub quiz to get your teeth into.  You can do this on your own, with your family or your friends, over Skype, WhatsApp or whatever social media channel you use.  We will of course send the answers to you at a later date.

We also wanted you to still feel part of the group in these strange times, so we are hoping to put together a WhatsApp Group for all of us to keep in touch.  If you would like to be part of this then please send us your mobile number so we can add you to the group.

Your MNTV Committee
Posted by Daniel Black at 20:00 No comments:

SADLY, WORKDAYS CANCELLED FOR THE FORESEEABLE FUTURE DUE TO THE COVID-19 (CORONAVIRUS) PANDEMIC

Although, currently, we cannot hold our Sunday workdays or weekends away, the National Trust and the Ranger teams at the National Trust properties we visit are working hard to ensure we can get back to what we do best - rhody bashing, footpath work, pond clearance, fencing and (hopefully) dry stone walling, as soon as possible, so please don't let it stop you getting in touch with us if you are interested in the type of work we do.

If you'd like to find out more, email us on info@mntv.org.uk so we can send you additional information about MNTV and add you to our mailing list if you would like us to.  That way, as soon as we find out when we can start volunteering again, we can let you know :-)

MNTV Committee
Posted by Sue at 10:00 No comments:

With the threat of coronavirus hanging over the country, there was some doubt over whether today's workday would go ahead. As it happened, this was the last time we would be out before stronger measures around social distancing put a stop to our activities for the foreseeable future.

There were ten of us on a day that promised some iffy weather, but turned out much better than we'd expected. Mark and Iain from the Hayfield team took us onto Park Hall Moor to pull small rhody regrowth on a patch that was extensively cleared, and which we've revisiting many times in recent years.

Thankfully, given the chilly wind on the moor, we then retreated to the woods, where we've also previously worked recently, to continue. 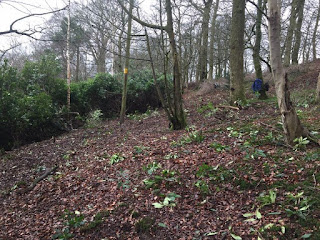 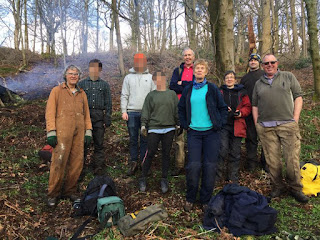 Matt
Posted by Daniel Black at 20:00 No comments:

Five of us, a smaller group than usual (partly due to concerns about the current coronavirus outbreak) met at The Hesketh this evening. Sue, Phil and Andy had a meal before the quiz started while Karin and Richard joined us a little later.
As the quiz papers were being handed out, we were told that the format of the quiz would be different this evening because the sheets had been prepared to raise money for charity. We would be taking part in the World's Biggest Pub Quiz, which was running between
8-12th March, raising money for Action Against Hunger. A donation bucket was circulated before the quiz began.
The quiz started with a picture round, all the names of the people in the pictures had a link to food or drink, then we were asked questions from 5 different sections and the answers in each section had links to something, be it sport, colours, mathematical terms, writers or elements. This was fun and helped us decide if an answer was likely to be correct.
Although there wasn't 'officially' a music section, the quiz master likes doing a music section, so added that in as an extra.
After we swapped papers with another table, the answers were marked before the papers were handed in to the quiz master to be collated. When the scores were read out, we came 7th out of, approximately, 20 teams - so not a bad result (mainly thanks to Phil's amazing contribution!)

Edging the drive at Dunham Massey on Sunday 8th March 2020

Nine MNTVers met ranger John in the car park at 09:30 for our second workday this year at Dunham Massey. We’d had no info about what job we’d be doing and it turned out the ‘routine’ bow saws and loppers we’d taken with us weren’t needed. We worked most of the day on our own as John was the only ranger on duty and had to spend most of his time supervising the carpark. 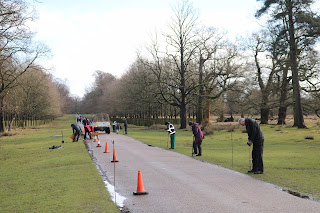 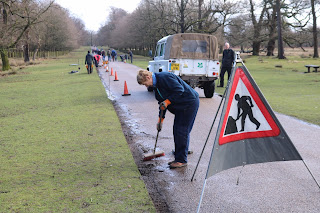 The task was trimming the edge of the main driveway leading to the house, a job well known to everybody who has a lawn in their garden, but in this case the ‘lawn’ was the park and the driveway is 1km long! 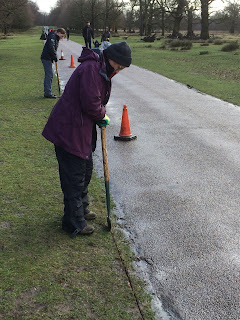 We hammered in metal posts, strung string between them, then used a hoe to cut a neat edge. This was a basic, straightforward but useful job; too big a job to complete in one day but we made a good start. 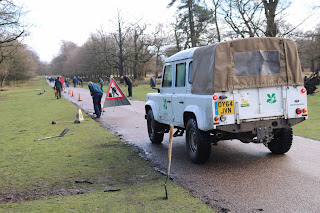 Once the trimmings and winter debris had been cleared way, the drainage and appearance of the approach to the house looked a lot better. The location was very visible to visitors and gave us lots of opportunities to chat and spread the word about MNTV.
The weather was wetter than forecast but the showers didn’t last too long and were followed by sunshine. We managed to have lunch during a sunny period; the cake selection today was multinational, stollen from Germany and Bolo de Mel de Cana (cane sugar) from Madeira. 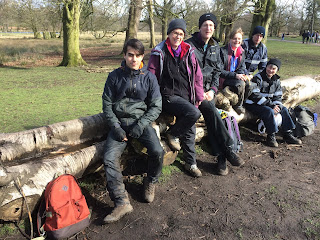 Text from Jean, Photo's from Jean and Karin
Posted by Sue at 22:30 No comments: