13 of us spent today at Lyme Park removing an old post and wire fence from a field behind the stableyard.  There were several jobs to be done - destapling, removing and coiling the two barbed wire strands at the top of the fence, destapling and removing the wire netting and, hardest of all, digging out the posts.  The posts had been put in mechanically when the fence was built 10 to 15 years ago and took a lot of excavating using mattocks, spades, shoveholers, iron bars and strops.  Some fenceposts were sawn off below ground level and the holes filled in - the stumps will rot down underground.  The last task, supervised by ranger Gary, was to install a new strainer post.

The Bowmen of Lyme were shooting in the field adjacent to ours.  One of them was hitting the bullseye on the target 30 metres away with arrow after arrow!

We finished work at 3:30pm and on our walk back to the cars an air-raid siren sounded.  We assumed it was to mark VE day in some way but it turned out to be the fire alarm in the hall out of which visitors were streaming!

We are back at Lyme on 14 June and 19 July and might well be erecting a new fence on the line of the fence that we removed. 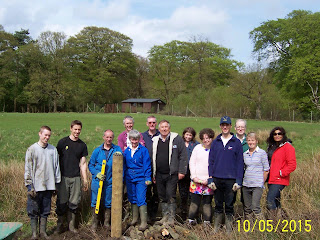