We spent a beautiful sunny day today at Hardlabour Crags, sorry Hardcastle Crags, shifting stone. Actually this turned out to be a fun task. Several local volunteers joined us at the work site which was a field just below the moors and above the woodland of the estate. There was a dry stone wall in a field that had been repaired and the leftover stone has been sitting on the field for a couple of years. It was the group's task to dig it out of the grass that had grown around (and over) it and load it onto a trailer. 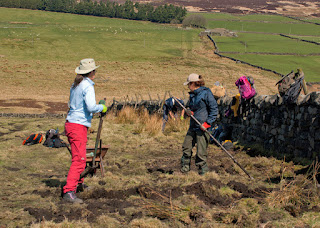 These stones will be used to repair a different dry stone wall around hay meadows on the estate. The bigger stones, once dug out, were rolled to the side of a track where they were picked up by Drew the ranger using the new grabber arm on his tractor combo. He is hoping we will show photos of this so that other rangers will be jealous. Drew estimated that we shifted about 14 tonnes of stones. 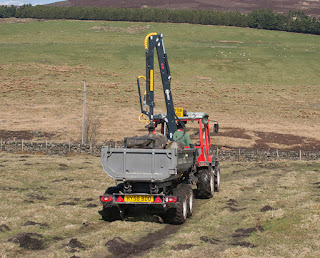 The local wildlife was much in evidence, including pheasants, lots of lapwings sorting out territorial disputes and rabbits that the ranger's dog enjoyed chasing (but not catching). Curlews were heard, but not seen.