The rhododendrons at Biddulph were looking glorious today (and the scented ones smelling glorious) and for once we weren't cutting any down.  Seven volunteers arrived and, once shown the tasks by the gardeners, were left to their own devices.  The morning was occupied by digging up tulips - they were past their best and were being sold off to the public.  The beds they were dug from are going to be filled with the dahlias that give the Dahlia Walk its name. 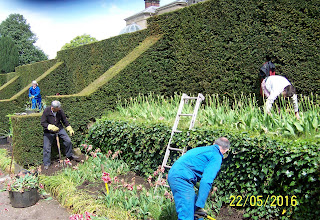 In the afternoon we moved to the area behind the rhododendrons on Lime Avenue and cleared out deciduous saplings and brambles.  The property is still deciding what to do with this area, but the most likely plan is that it will be used as a form of plant nursery.  The sun shone, backs were bent in honest toil and a fair amount of cake was eaten, as in addition to the excellent chocolate spice cake made by the worksite leader the gardeners had kindly brought us two more!
Mick
Posted by Daniel Black at 14:29