The weather forecast for the High Peak wasn't good today but we still got a decent turnout of seven MNTV members, despite the wind and the rain forecasted. We met the High Peak Rangers, Shane, Miles and Mark, and their dogs, in the Sett Valley Trail car park at 9.30am.
We then all moved our cars (to avoid car park charges!) and, once re-parked, hopped into the National Trust Land Rovers to get to Coldwell Clough.
When we arrived, we saw where the 3 new tree guards had been started by Shane and his team.
This had previously been arranged with Shane, who is a great supporter of our Volunteer Group, as a memorial to Susan Tarr, one of our very enthusiastic volunteers who had been with us for 6 years, but who had sadly lost her battle with cancer last October. We had taken a plaque with us to discreetly attach to one of the tree guards, as a permanent reminder.
Before we started, Shane explained the reasoning behind the choice of planting Alders in this particular spot, as they grew well in wet conditions and by streams. The nodules in their roots supported microbes and were therefore important to the ecosystem because they enriched the soil with nitrogen and other nutrients. Alders are monoecious and produce male and female catkins on the same tree. This occurs between February and April. The female catkins, once pollinated by the wind, gradually become woody and appear as tiny, cone-like fruits in winter. These cones then open up to release seeds, which are dispersed by the wind and the water. Alders are great for wildlife, particularly as many birds, including Blue Tits and Long Tailed Tits, enjoy feeding on the cones, which stay on the tree all year round.
When we got down the little hill to where the tree guards were, we started splitting the turf so the small trees' roots could be pushed and heeled in, ensuring there was no air left around their roots. Although the trees planted are small, by doing this, they stand a better chance of settling in and growing into strong trees in years to come. Each tree was then wrapped by a sleeve, which will stay on for the first 2-3years, to protect it from being nibbled by hares. Once done, each tree guard was finished off. 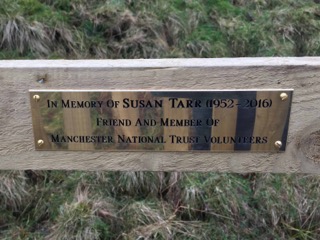 We gathered together while Daniel, our Chairman, then said a few words about Sue, how we appreciated all her hard work and enthusiasm and how much she will be missed. The plaque was discreetly attached inside one of the tree guards, and we paused to reflect for a few moments. 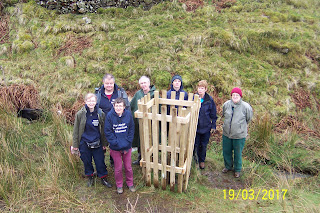 Afterwards, most of the volunteers departed, as the weather was getting miserable and some had already said that they couldn't stay for long, and Tim was full of a cold! Only Adrian and I stayed and did some gully clearance with Shane, Miles and Mark. We had the luxury of sitting in the Rangers 'office' for lunch, where it was dry and there was a kettle!
As always, it was nice being outside in the fresh air and not even the weather could dampen our spirits:-)
Photo's by Adrian and Daniel
Posted by Sue at 18:30