A Magnificent Seven contingent turned out on a distinctly unpromising morning for a task described as back-breaking, where visible progress is not always obvious. It's always good to start a workday in hopeful mode!

As it was, the drizzle stopped just as we reached the worksite, and Chris the ranger explained the importance of controlling the thistles that popped up all over the field we were working in. Having allowed the bees and other pollinators to gain some benefit from the flowers, it was time to remove them before they went to seed.

Armed with slashers, we set about taking off the thistles close to ground level. Some were small and were easily sliced, while the bigger thicker ones required a concerted whacking. But down they came, one by one.

We covered a large area quickly, trying (and failing) not to get our feet too wet in the long damp grass. By the time we were ready to stop for lunch, we'd moved so far across the field we had to pack up from our first camp, and set up Camp 2, where we found a little froglet hiding in the grass.

After lunch we continued to spread out, and the sun came out to make it a much more pleasant afternoon. To prevent repetitive strain, we kept switching between forehand and backhand (the 'Federer backhand' technique was particularly useful for removing bigger specimens!).

It was quite warm, and by 3pm we'd covered a good deal of ground, so shortly afterwards it was time to pack up, gather for a quick slasher-related group photo (meant strictly in the equipment sense - we're not rampaging killers - except of thistles!) and negotiate the A6 traffic home. 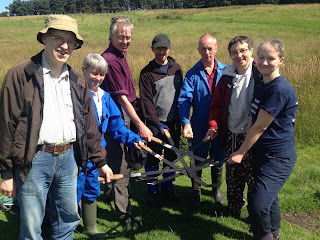