The tinsel is out, the bakes are baked and Santa is coming too. Yuletide in Yorkshire 2017

My journey from Edinburgh started with a train trip to Skipton via the very scenic Carlisle to Settle railway travelling through Garsdale station which I am familiar with. There was some snow at Garsdale. I then passed through Dent station which is "The Highest Main Line Station in England".  It is situated 1150 feet above sea level.  It was then all downhill to Skipton, of course, crossing the famous Ribblehead Viaduct and passing Yorkshire's 3 peaks - Whernside, Ingleborough and Pen-y-Ghent.

Once at Skipton I was met by Neil. We headed towards the basecamp in Upper Wharfedale but not before checking out the onesies on the market as we drove past.  Once out of Skipton and heading up the dale we stopped in Kettlewell to scout out where we were going to eat dinner later, as the Buck Inn at Buckden is currently closed for refurbishment as it has recently been taken over by new management.  We made our way to Townhead Barn, our base for the next two nights, and made ourselves at home.  (Note to self for next time: take a teabag or two so we can enjoy a hot drink before the stores box arrives later in the evening).  We headed back down the valley to Kettlewell for dinner and crossed paths with Tim on the way so we went back to fetch him and the 3 of us headed to The Bluebell Inn which was quite busy, which didn't surprise us as the Buck Inn was closed as was the Fox and Hounds in Starbotton (next village along).  Once dinner was finished we headed back to base, Tim found himself a bed and we sat and swapped stories whilst we waited for the others to arrive.
Saturday dawned cool and the cloud was hanging low over the valley.  Ranger Peter met us at base and told us that our worksite was across the valley so there was no need for us to drive.  We were to be working in Redmire Wood clearing cherry laurel.  We set off for the short walk to the worksite. Redmire Wood was created for Buckden House (now an outdoor adventure centre) which was the residence of Sir John Charles Ramsden and his wife during 1831-1879.  It was then lived in and cared for by the Stansfield Family until 1938.  The woods themselves were used as a pleasure park and so had lots of interesting and occasionally rare trees.  There are many carriage tracks going up the side of the hill for the residents and guests of the house to enjoy views of the valley.  The laurel had been left and is out of control, so we are carrying on the task of getting rid of it, a task we have been doing for our past visits to Buckden.  There is a lot of laurel to get rid of.

We spent our time lopping, dragging, chopping and burning the cherry laurel.  Neil put in sterling work as the fire master and before long we had a superb fire.  At break time we enjoyed my chocolate brownies and Lisa's son's ginger loaf.  Both were a big hit.  After first break, Matt and Lisa headed back to the base camp to start cooking our evening meal.  More on that later.  The rest of us carried on working, clearing a considerable amount which was actually only a small area compared to the vast amount on the hillside.  This is our third year doing this task and those of us who had been on other weekends here can certainly see a difference.  After lunch, which included rolls made by Lisa's son Ben, who is a keen baker and cake maker - he is looking to get a job in that field - Madeline and Geraldine took over looking after the fire.  We finished work at 3pm so whilst Peter took some of the group to see four very tall Giant Redwood trees higher up in the forest, three of us stayed behind as we had seen them before, and tended the fire and tidied up.  Once the 7 of us were reunited at the worksite we grabbed our things and made our way back to base. 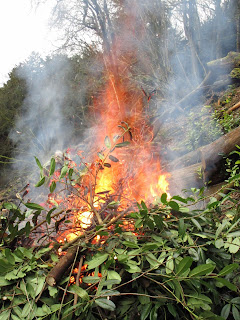 Upon arrival back at base Matt and Lisa were busy in the kitchen - they had all the timings of what should be in the oven when, planned to perfection.  We showered and changed into nice clean clothes, some people put their onesies on and others put their pyjamas on.  Dinner was served about 7pm and the table groaned with pain as it was laden with food.  There were 2 types of potatoes, 4 types of vegetables, of course turkey, pigs in blankets, gravy and stuffing!  Thank you and well done to Lisa and Matt for cooking it for us all.  After our first course we then all felt stuffed and decided it was probably sensible to not have pudding quite yet so we did some washing up and then opened our Secret Santa presents all of which were gratefully received.  Pudding time came and it was sticky toffee pudding - we all felt even more stuffed than we had after the first course. 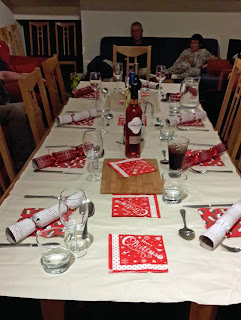 We took a closer look at some of the Secret Santa gifts (Pip was particularly happy with hers) and stack the chairs without knocking them over.  We had had quite a long day so some people headed to bed sooner than others, some played Cards against Humanity (hilarious) and others chatted before we all went to bed.

Sunday was bright but cloudy and it was decided we would go for a short walk.  We breakfasted and Tim headed off home while the rest of us headed for a walk in the direction of Hubberholme and back.  Once back at base we made some lunch, some headed off for a picnic and others ate at base and then departed for home. 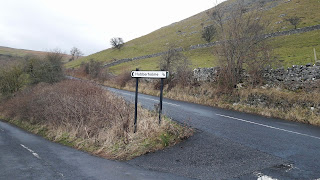 To sum up the weekend I will leave you with these words: lots of work done, too much food eaten and not enough sleep had!  I ache all over!  See you next time, MNTV