After a forecast earlier in the week of torrential rain our workday at Styal turned out to be a beautiful day - so much so that at midday Stuart, Styal Ranger, had to open the overflow car park.

Once we had all assembled Stuart showed us our task for the day.  In the car park area are two ponds that had both been surrounded by linked chestnut fencing.  They had previously had two corporate groups in who had started on both ponds removing the old fencing and replacing with the more rustic cleft fencing.  As time ran out on them our job was to, if possible, complete the circle around one of the ponds.  We set to work, eventually splitting from two groups to three groups.  Two groups worked on the pond we wanted to complete and the third group moved to the other pond so we wouldn't be getting in each other's way.

By lunchtime we had just two more holes to dig and uprights to put in to complete the circle, the last hole being the most difficult as we had to fit both sets of crossbars tightly into the post so there was no movement in them.

Stuart was extremely happy with what had been achieved as we had not only completed one pond but had put in a good section of the other pond.  We would have done more but we ran out of fencing material, hence a slightly early finish. 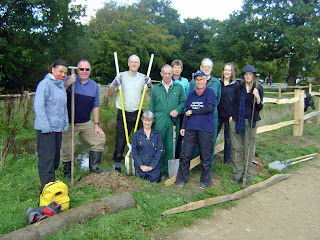 Thanks to Stuart for providing a rewarding workday and thanks to my colleagues for all the hard work.

Nice and good article. It is very useful for me to learn and understand easily. Thanks for sharing your valuable information and time. Please keep updating workday training