We arrived at the Ranger Station in Formby to be offered tea and biscuits by the rangers, but declined in favour of starting work whilst it was still only drizzling.  We had the company of four rangers for the day and were driven into the local woods to take down some old wire fencing.  On the way the vehicle towing the trailer got stuck between two trees, but as we were nearly at the worksite it didn’t matter, we just unhitched the trailer. 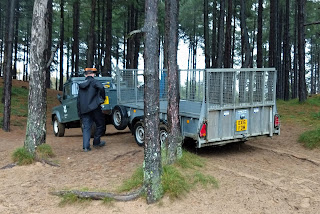 After working hard in light rain removing wire and digging up posts we prepared for a late morning break, but just then it started to rain very heavily so we quickly tidied the site and hitched a lift back to the Ranger Station for an early lunch.  On route the rangers got a call to say that a car had had an accident and spilt oil over the track to the caravan park.  The area is a SSSI so the spill had to be contained and the rangers dashed off to assess the situation whilst we had lunch in the dry. 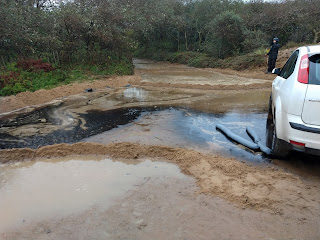 After lunch we helped the rangers shovel sand around the oil spill to contain it.  Once we had done all that we could, bearing in mind that anything we put down would need removing again, the only thing the rangers could do was to wait for the oil clean up expert to arrive.  Just as we debated what to do next (a spot more fence clearing perhaps?) the rangers had a call to investigate a fallen tree, so we felt the best thing to do was get out of their way and come home.

Thanks to the rangers for looking after us and I hope it all ended happily.

Jenny
Posted by Daniel Black at 13:07