'Slow the Flow' at Hardcastle Crags on Sunday 26th January 2020

Today's workday took us over the border to Yorkshire, and Hardcastle Crags near Hebden Bridge. In 2015 the town suffered severe flooding, an increasingly common occurrence in the Calder valley. Some residents decided to take an active role in protecting their local area, and formed 'Slow The Flow', a group aimed at reducing the impact of future floods.

Five volunteers from MNTV joined another twenty or so Slow The Flow volunteers to create several 'mini dams' across the streams and runnels on the hillside above the valley. Around 400 of these have been set up around Hebden Bridge, and while one dam on its own makes only a small difference, the idea is that several hundred will significantly slow down the rate at which water runs into the rivers that flow through the town. This should reduce the height of the water at 'peak flow' time during flooding events, which could avoid damage to property, or at least reduce the impact where complete avoidance is not possible.

The work involved teams of 6-8 people lifting large sections of tree trunks into the bed of the stream or runnel, while others cut smaller branches and pieces of brash to help finish the dam. About a dozen new dams were installed in the woodland where we were working, before we stopped at midday. The morning's rain put the dams immediately to the test! 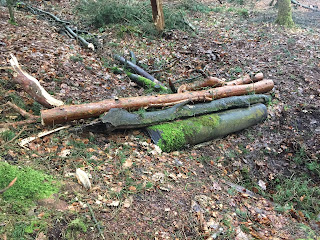 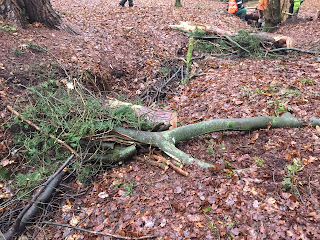 After lunch in the welcome shelter of the rangers' office, the afternoon's job, billed as 'tree planting', turned out to be the complete opposite! To encourage light to reach the floor of the woods and encourage greater biodiversity, some of the pervasive beech trees had their side branches cut back to create a wood 'monolith'. Many young beech trees had sprung up in the understorey, and would quickly take over if not controlled, so our job was to cut them back and place them on brash piles to rot down. It was tricky work on the steep slope, but we made progress over a large area before we called it a day.

Even on a damp day the woods were full of walkers, testament to the great beauty of this part of the world. It was good to know we'd played our part in not only keeping it looking beautiful, but also helping the people who live in the area.
Posted by Matt Smethurst at 14:25