Long time members will remember Tim Jarvis (ex-Chairman), active in the group ~1995-2005.  He moved back to Essex over 11 years ago but from time to time comes back up north and did so last week.  Five of us met him for drinks in the Waters Green Tavern in Macclesfield, one of his favourite pubs.  There was no missing Tim - he was wearing a vintage Manchester NT Volunteers T shirt!  Tim's a real ale buff and had detailed notes of dozens of pubs in Macc, Bollington and Buxton to try over the three days - half a pint in each mind! 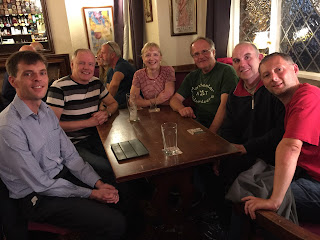 It was good to catch up with Tim, hear what he's up to in Essex, congratulate him on his recent marriage to Lolita, tell him about MNTV's current activities, show him the 2014 and 2015 Yearbooks and ask him to join us in Snowdonia next April.  Currently he works weekends so that will prove difficult but if a weekday job comes along and Lolita approves may be possible!