A fire, a storm and a Lentil Stew - 6 travel to Wonderful Wharfedale
Participants: Sue B, Tim O, Louise L, Neil B, John W and Ally H. Rangers were Peter and Roisin.
Staying at the Town Head Barn in Buckden. 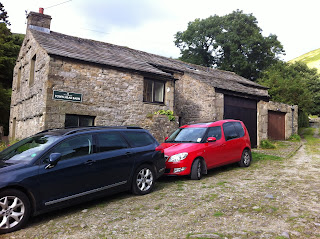 It started on Friday night with a meal in the Buck Inn, 4 of us sat down to a very tasty meal and just after we had ordered John appeared so we added his order to ours and set about swapping stories. At a just before 8 pm Neil, Sue and Ally headed back to base as Louise was due to arrive at that time. Tim and John W stayed at the Buck Inn and tried the Cider and Beer.
Saturday dawned bright but cloudy and the task was lopping and burning laurel in Redmire Wood. 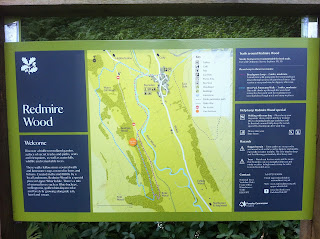 Redmire Wood was a short walk along the river from the basecamp and was created for Buckden House which was the residence of Sir John Charles Ramsden and his wife during 1831-1879.  The wood was cared for by the Stansfield Family until 1938.  The woods were used as a pleasure park and so had lots of interesting trees from all over the world.  There are carriage tracks going up the side of the hill for people of yester year to enjoy views of the valley.  It was this we were trying to get back.  It will never be as it was as there are some very large trees, some of which are quite rare.
The laurel had been left for quite some years and was out of control and so we were getting rid of it.  We did this by lopping and sawing our way through the big and small bushes and burning it. We spent the morning chopping, sawing, dragging and burning the laurel. 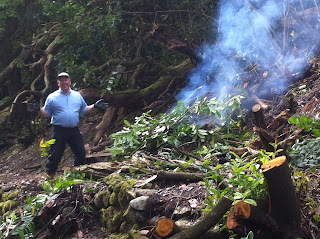 We ate our lunch by the fire on a flat area of ground and swapped stories, during the afternoon we carried on lopping, sawing and burning. We put the larger branches in piles to form wildlife habitats or insect hotels. The thinner longer branches were piled up and cut up  with loppers and then put on the fire. 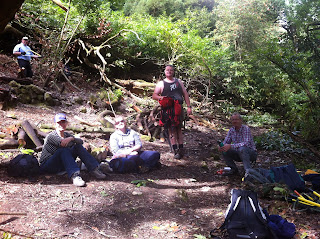 At about 2.30pm we decided to stop cutting so we could burn all the laurel that we had lopped and cut. Some of us headed back to the base camp shortly afterwards Neil and John stayed to tend the fire until it had burnt down enough to be left and wouldn’t set the rest of the forest on fire. Once we were all back at the basecamp we decided a trip the pub was deserved so the 6 of us headed for a swift pint. Ally, Sue and Neil headed back to base early to make the dinner and were joined just as dinner was ready. We dined that evening on Lentil Stew and Pasta with Salad, desert was Meringue with Strawberries and Cream.

That night there was a thunder storm which woke some people up but others didn’t hear and didn’t believe had happened.
Sunday dawned cloudy with moisture in the air it didn’t stay like this long though.  We breakfasted on cereal and toast with bacon and eggs available too. Our Ranger today was Roisin, she met us at 9.20 at the barn with two other Volunteers Simon and John.  We spent the morning carrying on with the work we had started the day before, but because there had been rain during the night and the ground was slippery we split onto two levels. John W and Neil got the fire going and we started lopping, sawing and dragging. The fire didn’t really get going with all the prodding and poking so we had a coffee break during which Roisin produced some of her cakes she had entered into the competition at Malham Show where she had been the day before with a stall for the National Trust. Unfortunately she didn’t win any prizes for her cakes we of course gave her first prize, during our break the Fire finally got going so we carried on burning. At about 12.30 Roisin took Sue, Louise, Ally, Simon and John to see five very tall Giant Redwood trees and den area. 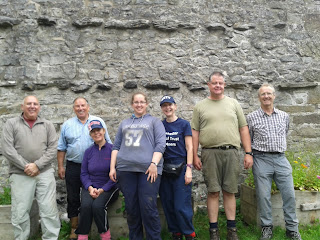 We finished working at 1pm ate our lunch and then headed back at the basecamp. Cleared up and Tim, Louise and Sue headed for home.  That left Neil, John W and I as we were staying Sunday night we ended our weekend with a trip to the pub for our evening meal.
Many thanks to all who came and the Rangers for not cancelling the weekend due to small numbers. I look forward to seeing more of you next year.
Text by Ally.
Posted by Sue at 23:46