Fence removal at Lyme Park on Sunday 14th May 2017

Ten of us met in the main car park at Lyme before Craig, one of the Lyme Rangers,  arrived to tell us where we would be working.
Craig explained that there was a long run of  about 600metres of fencing, wire and old posts, that needed removing at the Deer Sanctuary along East Drive near Caters Slack.  A short run of the fencing had already been removed and new stock fencing fitted, so the deer could safely jump over the fencing to get onto Caters Slack, a large grassy area, which will be home to some Highland cattle and Aberdeen Angus cattle once all the new stock fencing has been fitted.
We squashed ourselves into a couple of cars and drove up to the deer sanctuary to start the work. We had been pre-warned to wear long trousers and tuck them into our socks and long sleeved tops, because it was tick season and, being near the deer sanctuary, it was advisable that we protected ourselves as much as possible!!
It was a lovely day(mainly) but, during the morning, we were aware of a large grey cloud coming our way!! 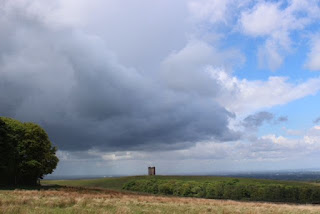 Just before it arrived, most people went to sit in the cars to stay dry. Karin and Sue however, decided to don their waterproof clothing, and stick it out! The rain, with a bit of hail, passed fairly quickly, then we were all back out working in the sunshine. 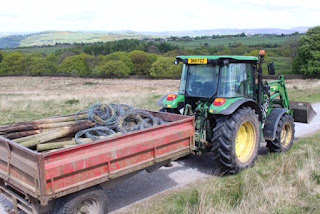 Craig  used his tractor during the afternoon to help loosen some of the stubborn posts, so we could then remove them. 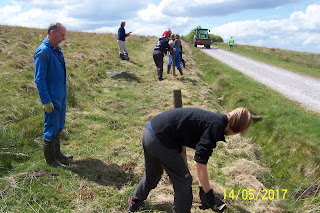 We all worked hard, with laughs along the way, and had finished removing the barbed wire, wire and fenceposts by 3pm. 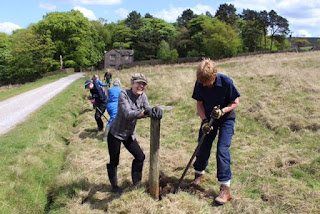 It was a good day and we were pleased that we'd managed to get it all done:-) 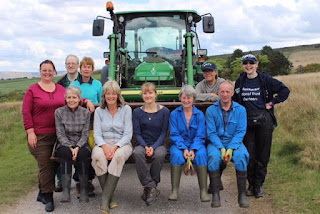 Thanks to Karin and Adrian for the photos.
Posted by Sue at 20:30