Fifteen of us turned up on a cold, crisp Autumnal morning to meet Craig the Ranger. 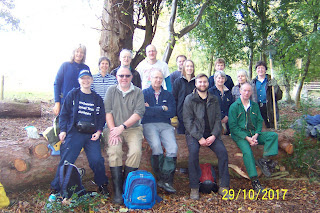 We walked from the main carpark to the Cross near the Chapel, where Craig had taken our tools in his vehicle. We then unloaded the tools and carried them to the woods behind the Chapel, where there was already a previous fire site cordoned off by orange netting. Some of our volunteers were keen to get the netting down and get the fire started!

We had various tasks to do which would tidy up the area behind the Chapel and at the start of the woods. 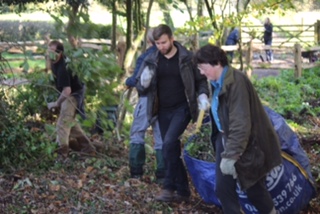 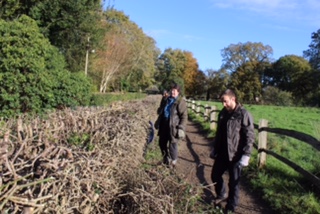 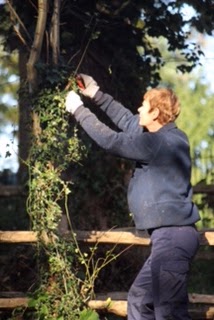 These included removing the ivy from gate posts, fence posts, trees and even an electricity pole where the wire had been completely encased by ivy; cutting down the hedging and tree's along the perimeters to tidy it up for Winter; collecting the hedge clippings after Craig had used his petrol hedgecutters on the top of the hedge that runs the width of the Chapel, then cutting the front of the hedge, then a final cut (once the clippings were clear) to cut anything that had been missed and to go down as low as he could to the base of the hedge; dragging and burning as much of the clippings, ivy, brush and tree's that we could; blowing the leaves off the path with the leaf blower; scraping the mud and grass off the path and from the drainage gully's etc etc 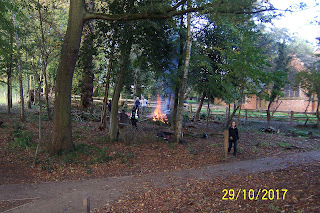 As we were leaving and the fire was dying down, we replaced the orange mesh to keep inquisitive dogs away and ensure passers were aware of the danger.
It was certainly a lovely dry day, with plenty of chat and banter amongst the volunteers, and plenty of different tasks to keep us busy. Ranger Craig was delighted by all that we managed to achieve:-) 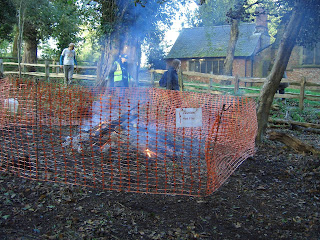 Photo's by Karin and Adrian
Posted by Sue at 22:00