The weather was kind to us (for February) - although we didn’t get treated to the glorious views from the top of the Cloud we did get a dry day.

Tim, the NT ranger, had two possible jobs for us to do:
1.  Improving a footpath which was getting muddy and wider as people took a detour out of the mud.
2.  Chopping down pine trees from the heath.

Six intrepid volunteers turned up for the work day which Tim thought was enough people to get on with the footpath.  Tim reasoned that if he could carry one of the short wide logs intended to go across the path up the hill on his own then four of us could manage one of the 16ft poles to go along the edge.  Between us we did manage to climb up the hill with several of the long logs, but we did have lots of stops on the way.
The long logs were staked beside the path with shorter logs going diagonally across to encourage the water to flow into a stream beside the path.  Tim pointed out that the “stream” was in fact the old path, which had been eroded away after people had created a new path a few feet away.  The work we were doing was to stop the same thing happening again. 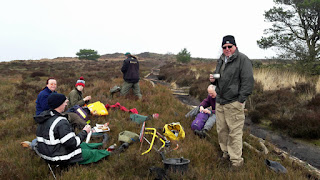 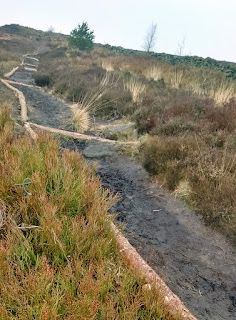 After lunch we swapped from carrying the long logs to carrying smaller birch trees up the hill with lots of branches to fill in the side of the path to “encourage” people to stay on the path. 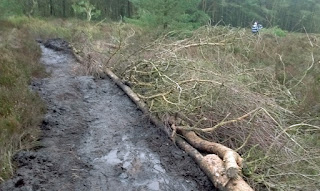 With a section of path complete, and no one having the energy to haul any more trees uphill, we decided to tackle a few of the pine trees.  At the start of the day I had envisaged chopping down majestic pine trees and shouting “timber” and perhaps singing the lumberjack song.  The reality was pulling up the smaller trees (2ft tall) and chopping down the slightly bigger trees from the heath.  We cleared quite a large area in a short time, ending the day with the satisfaction of two jobs done.