Chris, Lyme Head Ranger, had a new area for our 10 hardy volunteers to work in, this being Coalpit Clough. This is an area so dense with rhododendron that, because of its location, it had never been touched - until now! 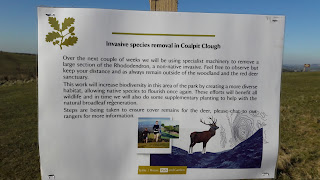 Chris explained that he had been given 10 years to eradicate Rhodi from the whole estate which, given how dense Coalpit Clough was, would have taken most of that 10 years on its own.  Luckily monies became available from bequests for the purpose of woodland management and Chris was able to apply and win some of this money.  This money has been used to bring in specialist machinery, for approximately 8 days, which will have cleared as much as would have done in maybe 4 years. 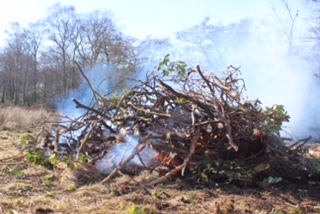 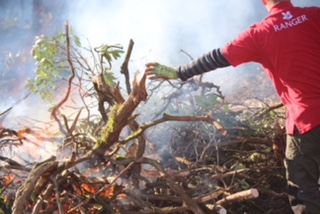 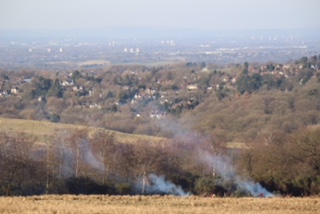 Anyway we set to work on a beautiful winters day with 2 fires going burning some of what the machine had already cut, once this was all loaded onto the fires we continued cutting down the Rhodi so we could build the fires back up before leaving for the day.  This was to enable the rangers in the morning to just take the ashes and there would be enough heat left to start the fire again. 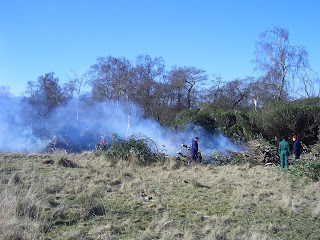 We were joined at break by some red deer who emerged from amongst the Rhodi but once they had checked on what we were doing and decided it wasn't interesting they left. 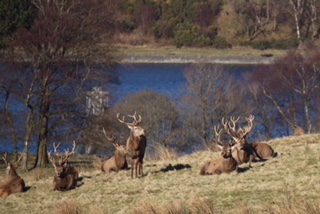 It did seem strange leaving fires burning unguarded but as no public are allowed in that area and deer know better, Chris said it wasn't a problem.
Everyone left a little tired but satisfied after yet another goods days work. Thanks to all involved. 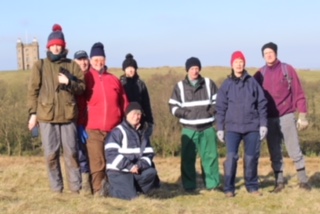 Christine
Photo's by Christine, Karin and Adrian
Posted by Sue at 22:00