The annual rut at Lyme has just come to an end, and the deer in the park have moved up to the hill called The Knott to feed and rest. Not a good time to be taking down and repairing a big drystone wall that prevents the deer from entering a nearby wood.

Sadly MNTV weren’t working on the wall. Instead we were moving and re-erecting a temporary deer fence just behind the wall, to allow the walling contractors to begin work on the next section of the repair.

We had a team of nine, and split up so that some of us were detaching the fence from the existing posts, some were uprooting the posts from their current positions and others were knocking posts in further along the wall where the fence would be moved to. 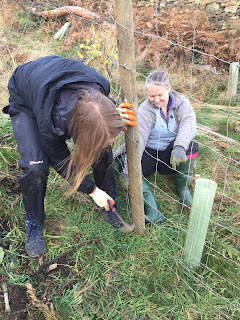 The work of detaching the fence was reasonably straightforward while removing the posts took a bit of heave-ho. Knocking the posts into their new positions was more precarious. This involved standing on a raised step (on a 1:3 slope!) and using a post driver to knock the posts in. Some good teamwork and help from ranger Dan helped us to get the posts in on the steepest parts of the hill. 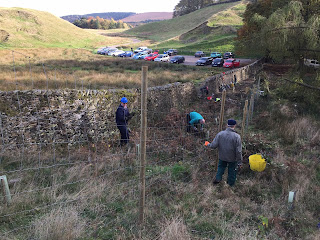 After morning break the now detached fence was ready to be reattached in its new position. It was a bit tricky to maintain tension along the whole fence while dealing with the changing steepness of the slope, but we managed to put up something that not only looks ok, but more importantly should stop any adventurous deer with thoughts of wandering. 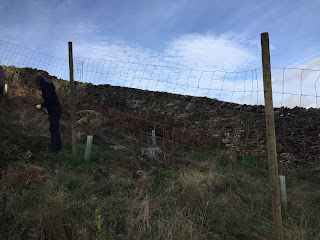 The fence was attached just in time for lunch, and just in time to deter the first would-be invader, a stag with magnificent broad antlers (we must have done a good job as he turned back 100 yards away).

After lunch we cleared bracken from alongside the wall before an early 2pm finish. You can’t beat efficiency like that! 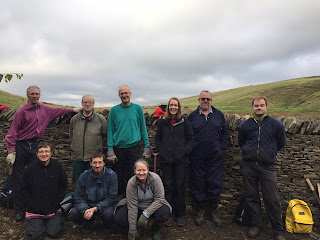