Today five of us (Andy & Christine, Daniel, Andy Screen and John Walsh) travelled to the Welsh border for our third workday of the year at Erddig, an NT house and estate near Wrexham.  We spent the day cutting down saplings and scrub from below a high voltage powerline on the edge of the property.  Andy lit a bonfire about 100 metres away in a clearing in the woods and we dragged the cuttings over to it.  James (Head Ranger) said it wasn’t safe to have a fire below the powerline because there was the possibility of electricity discharging to ground down the plume of smoke!

Today was Remembrance Sunday and the 100th anniversary of the signing of the armistice that ended World War One.  At 11 o'clock we observed two minutes’ silence to remember those who fell in WW1 and all wars.  Christine streamed the BBC’s coverage of the service at the Cenotaph in Whitehall as we stood around her flag in silent reflection. 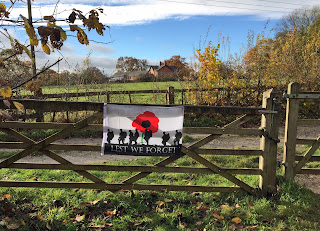