Nine go to Cumbria: Wet, Wet, Wet feat. Santa
Starring: Matt, Lisa, Ally, Neil, Tim, Sue, Pip, Mick, Martin and Ranger Philippa
Guest Starring: Ranger Bethan
In the run up to our annual Christmas Weekend it had been a very wet few weeks, but that didn’t put off ten volunteers from signing up.  It turned out to be the wettest weekend in a long time.  The weekend starts here!
It started with my trip south on the train to Oxenholme where Sue and Neil met me and we headed to basecamp.  En route we discovered that the three of us had forgotten to look up the safe code for the keys to get into the basecamp, all thinking the others will have done it so as Ally tried to log into Dropbox to get the document we drove under cloudy skies closer and closer to the basecamp.  With the signal not too good we couldn’t get the document we were after so were relieved to find Philippa in the office to ask her.  We were joined later by Tim, Pip and Mick and it was then we discovered that our tenth member Nasrin would not be joining us as she had a bad cold.  We hope you feel better now Nasrin.  We adorned the basecamp in Christmas decorations which included lots of colourful lights winking and blinking at you wherever you looked and many sparkling bits of tinsel.  At 6pm we headed out to the Outgate Inn near Hawkshead for our evening meal.  Upon returning we found the final three members of our work party (Matt, Lisa and Martin) had joined us having travelled up after work.
Saturday dawned wet and Ranger Philippa met us at the basecamp at 8.45am and helped herself to a cup of tea whilst we finished getting ready.  We set off at about 9.30 after Lisa had a hunt for her car keys – always check the jacket you were wearing last night!  Our worksite today was Fell Foot Park on the southern shores of Windermere.  It was here we met Ranger Bethan who works at Fell Foot and was very pleased to have some help.  Our job was digging out brambles in an area next to the exit road.  Easier said than done!  Bethan wanted them and their roots dug out.  Some of the roots were really quite long and tough and I’m afraid to say some of the roots broke so the brambles might be back next year.  Having been to collect the tools from their shed on wheels we spent the morning digging away in the rain. 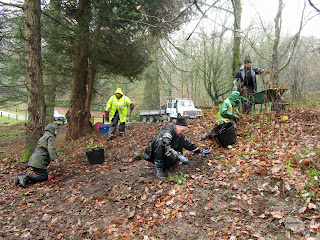 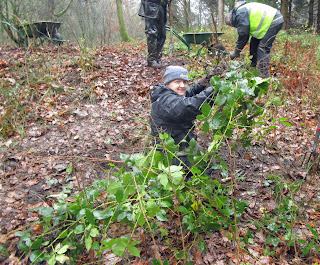 At lunchtime Matt and Lisa left the worksite in order to go and prepare dinner and the rest of us, as promised by the Rangers, headed for cover to eat our sandwiches.  The lunch room was rather posh and new looking.  It was in fact the clubhouse of the boating club at Fell Foot so we took off our wet waterproofs and boots and sat at a table (!!!) whilst we watched the rain come down outside.  After lunch, having put our boots and waterproofs back on, we had the chance to change tasks.  Some did and some didn’t.  Those who did went with Bethan.  She had a metal rod sticking out of the ground that she wanted to find out what it was so Martin, Tim and Neil went with her to see if they could help.  They dug down about 4 feet and there was still 3 feet left to dig down so they admitted defeat and returned to where the rest of the group were still pulling up the brambles and it was still raining.  If anyone knows what is at the end then please let us know and we can pass it on to the correct person.  We carried on with the brambles task getting really quite muddy and at about 3pm called a halt to the day as we were wet, muddy and tired.  We packed up and headed for the warmth of the cars and back to basecamp. 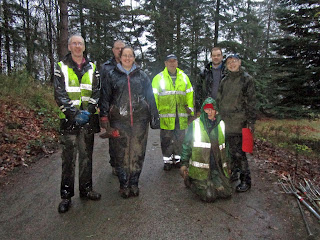 That evening we dined on Roast Chicken.  The table groaned with pain as it was laden with food: there were two types of potatoes, five types of vegetables, pigs in blankets, gravy and stuffing!  Thank you and well done to Lisa and Matt for cooking it for us all.  Santa arrived on his sleigh and gave out the presents in his sack and we all got a present. I got some banana lights that I have stuck up in my kitchen and some Danish Traditional Butter Cookies.  A number of people got games so we broke with tradition and played Who am I? (Lisa’s present), The Music Quiz (Neil’s present) and Pub Quiz (Matt’s present).  We then decided it was time to go to bed! 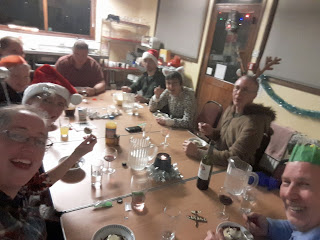 Sunday morning, and today it was not conservation work we were doing it was clearing up basecamp and being tourists.  Whilst eating breakfast we spent some time watching the birdlife around the basecamp.  Sue got very excited at seeing the local woodpecker and jay along with many other finches and tits.  After breakfast we tidied up and some of us walked over to Hawkshead and others went by car because it was still raining or we had exerted ourselves a little too much the day before.  We visited the Christmas market.  Neil very kindly provided a shuttle service so we didn’t have to walk back in the rain to basecamp and it was getting late.  Once back Mick and Pip left and the rest of us had lunch, cleared up the last bits, packed the cars and headed home.  It was not a pleasant journey home down the M6 - the rain just kept on coming.  I can inform you however that on Monday whilst in the Manchester area I experienced a small amount of rain in the morning and then blue skies.  On Tuesday, when I left for Edinburgh the sunshine was out, there was some mist and fog patches on the way north but it was a beautiful day in Edinburgh city centre when I got back.  It’s Wednesday now and you guessed it, it’s raining again!
My thanks must go to Neil for my transport and to Matt and Lisa for their superb cooking.  I look forward to seeing you all again soon.
MNTV you were awesome. Let’s do it again!
Ally x
Posted by Daniel Black at 10:43