Starring: Daniel, Ally, Neil, Martin, Jenny and introducing weekend virgin Sarah
Guest Starring: Rangers Rhydian and Geraint
On Friday 12 July, six of us made our way to North Wales for our annual Snowdonia weekend.  This year however we had Summer in Snowdonia rather than our traditional Spring weekend – traditions are there to be changed!  Four of us met at the luxurious (compared to some) Hendre Isaf basecamp at around 6pm and enjoyed Jenny’s Chilli with enough rice to feed the whole of the estate. Once Martin and Daniel had arrived at 9 and 10pm respectively we emptied Daniel's electric (!!) car of food and the stores box then swapped stories and headed for bed.

Saturday dawned cloudy and cool and Daniel went for his morning run whilst the rest of us slept soundly.  We were met by Ryhdian at about 9am at the basecamp and drove for a few mins round to Pant Glas farm and our worksite for the day. Our task was to clear the ground around four or five year old oak and pine trees.  To clear around them we used loppers and bow saws to cut down brambles, raspberries (which Jenny kept tasting before cutting them down), rosebay willowherb and birch trees.  We left some of the birches in place if there wasn't a pine or oak nearby.  The hope is that in years to come it will the plantation will become an oak wood.  The pines are there to encourage the oaks to grow.  Some of the pines and oaks were easy to spot but others were playing hide and seek, being hidden by brambles, rosebay willowherb and birch. 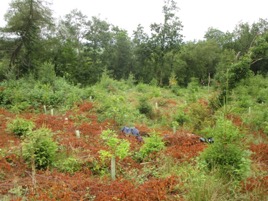 Elevenses was at 11 and it was back up to the vehicles where we had left our bags for the day.  We sat in a row on an old drystone wall which had been built using smaller stones and slates than we had expected.  We enjoyed Jenny's Chocolate Chilli Brownies and Lemon Drizzle Cake - Thank You Jenny.  I took the weekend off from baking. 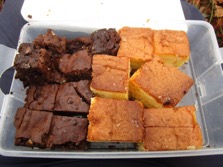 From our position on the wall Daniel pointed out the higher mountains of Snowdonia including Moel Siabod, the Carneddau and part of Snowdon itself.  It was at this stage Rhydian informed us that Wales has more castles / hill forts per square kilometre than any other country in the world!  After our break it was back to the plantation to carry on our work.  It was a bit of a walk and you could see the dying brown birch cuttings from previous groups' work which will hopefully be what our cuttings look like in a few weeks.

Lunch was called at 1pm and as it was a large area Jenny blew her whistle so we could all hear it.  We headed back to our drystone wall and six of us faced the same way as we had for elevenses but Neil decided he would be different and face the other way, thus being in the direction of the approaching weather.  Luckily it never got as far as us.  Part way through lunch Neil suddenly proclaimed “That sheep hasn’t stopped chewing since we sat down”.  There were sheep near where we were having lunch and so he proceeded to partake in a “Did you know sheep chew?” survey.  We never got his conclusions so if you are out on a workday with him and he gives you an update, do let me know.  After lunch it was back to the hard work.  In the end it turned out to be a very warm day and we got a lot done.  Some of the young trees were surrounded by other plants and you couldn’t see them. Sarah was working on an area so thick with rosebay willowherb that they looked like curtains and when she pulled them apart to look for an oak she looked like she was looking out of the curtains at the theatre on the opening night of a play.

We spent some more hours lopping and sawing, sometimes blocking ourselves in but able to get out by stamping down the no longer wanted foliage.  At 3pm we called the day to a close.  Rhydian couldn’t stay with us any longer because he was off to a wedding in the evening in Pwllheli and had to get home and changed.
We headed back to base and one headed for the shower and the other five went to Betws-y-Coed excitedly in Daniel's electric car and to Cadwaladers ice cream parlour.  It has a wide range of flavours from Mango Sorbet to Honeycomb plus dairyfree options.  We tried three flavours between us: Chocolate, Mint Choc Chip and Malteaser. 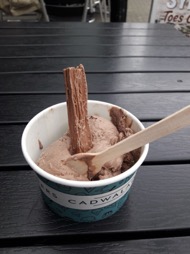 Once back at base we showered and prepared dinner which this time was meatballs in a tomato and pepper sauce with garlic bread (which got a little over done in the oven) and for pudding the traditional Apple Crumble and Custard.  Daniel commented that this was the first time in a long while that there had been no vegetarians on one of his weekends.  After dinner someone decided it was time to play Ally’s Five Second Game, a version not quite as the rules said but great fun was had.  After this it was getting late so we drifted off to bed - everyone slept well that night.

Sunday again dawned cloudy and cool and Daniel went for his morning jog - he's one dedicated man.  Breakfast was cereal and toast plus bacon, baked beans and eggs all expertly cooked by Neil.  Geraint met us at the basecamp and we headed to the same worksite as yesterday, but this time took our bags down to the worksite so no sheep survey for Neil.  We worked away finding and clearing around the trees.  Some stayed a short distance from the bags and others worked further away.  After cake at 11 we went back to our trees and looking round the worksite whilst others were working it was funny seeing trees tremor and disappear, sometimes revealing a different tree.  After lunch and a bit more work we called it a day at 2pm.  We had done a lot and felt like we had worked a lot.  We picked up our tools and bags, headed for the vehicles and back to basecamp.  After waging war with our sleeping bags and taking what we wanted from the leftover food we reluctantly headed home whilst listening to the Cricket World Cup final (England v New Zealand) on the radio.
We will be returning to Snowdonia at some stage in 2020.  When?  I’m not sure at the moment.  The weather may not have been as sunny as our previous visits to Snowdonia but the company was just as good.
My thanks to Neil and Daniel for my lifts to and from Manchester and thanks to Jenny for providing dinner on Friday and the delicious cakes.  MNTV you rock, but where were the rest of you?
Summer in Snowdonia 2019 – Done!
Here's to next time MNTV!