Seven of us, including mother and son Marianne and Callum who were with us for the first time, met Ranger Iain in the Sett Valley Trail car park, Hayfield, on a very cold and frosty morning!
Once we'd all arrived, we drove our cars in convoy to nearby Park Hall.
After parking, as we followed Iain up the bank carrying our tools, we easily found the platform that had been built for the fire so it was raised up to protect the ground underneath. After a tools and safety talk, we started the task of dragging the previously cut rhodi brash towards the fire so it could be cut down to smaller lengths to fit on the raised platform. Iain started the fire quickly as everything was very dry so we were soon walking around, dragging the brash, and getting warm:-) 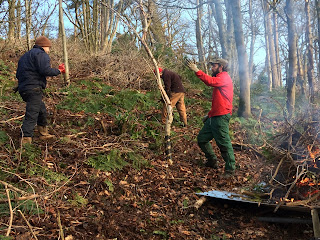 After lunch, having cleared a lot of the area around the current fire site, Iain came with us to locate additional fire sites that could be used later in the week. Once these were agreed on, we again started dragging the brash around them nearer to where the new fire sites would be, cutting it into smaller pieces so it would fit on the platform once it had been moved to the new locations.
There was also some live rhody so, for a change, we cut that down or pulled the roots of the smaller shoots out of the ground.
Although cold, it was a fabulous day, cold and crispy - with a hot fire to keep us warm if we needed it. 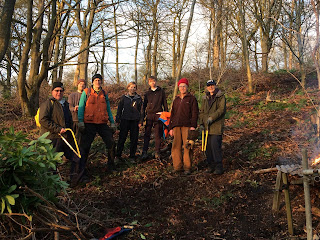