Nine people signed up for the annual Christmas weekend which this year came from Calke Abbey.  We hadn't been for 15 years and it was great to get back after so long.  Jenny had picked me up at Macclesfield station (thanks Jenny) and although we got stuck in a bit of traffic we made it to the basecamp by 5pm.  We were met by Mick, Pip and Neil who were just off to explore the park in the dark.  It was at this point that I informed the assembled group that Tim would not be joining us this weekend as he was not well.  We hope you are now feeling better Tim!  Jenny and I unpacked our things from Jenny's car and were shown around the basecamp by Neil who had decided not to go exploring.  Once we had worked out who was in which dorm we got our beds ready.  Pip and Mick got back and Jenny drove us into the village to find something to eat.  The first pub we tried wasn't serving food, so we tried another one (The Wheel Inn) which had been recommended by a local in the first pub, but which we had seen in the basecamp was now closed.  Surely the residents of the village couldn't be wrong could they?  They weren't ... the Wheel was most definitely open.  We knew that Denise was on her way after a day at work and decided to wait for her before ordering our food and had a sharing platter whilst we waited.  Once she arrived we ordered our food.  Everyone thought better of having turkey and all the trimmings as we would be having that tomorrow night.  Once finished and paid up we headed back to the park.  To enter after dark we had been given the barrier code ... would it work? Yes!  Next question ... as we were now in two cars, would both get through the barrier before it closed?  The answer was again yes!  Once back we showed Denise around, made sure the Christmas decorations that we had put up earlier in the evening were just so and waited for our esteemed leaders, Matt and Lisa, to arrive.  When they did we helped unload their car and soon headed to bed. 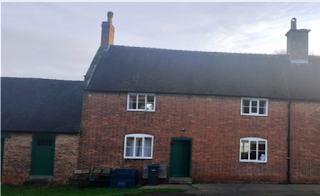 Saturday, we were up early to eat breakfast and make lunches.  At about 8.30 someone spotted a Ranger arrive for work.  Would this be our Ranger for the day?  At 9.30 said Ranger Iain came over and met us.  As there were 8 of us and the property dog, Hayley, we couldn't all fit in his vehicle and he asked if someone would be happy to drive the National Trust Land Rover.  Lisa offered and so we set off.  Much to Lisa's surprise we travelled out of the main park and onto the public road (!) to the worksite.  Our worktask for the day was to clear bracken and brambles from around recently planted trees.  We used scythes and loppers to clear an arm's length round each tree so the Rangers would be able to get their flail out to do the rest.  We did have to watch our footing because in some areas there were several large deep holes.  Thankfully there were no casualties. 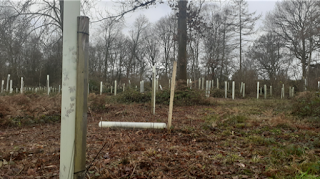 At lunchtime, Iain ran Lisa and Matt back to base so they could begin cooking dinner.  After lunch the rest of us carried on working.  The task was great for getting any anger and tension out.  During the day we found a pond that the ranger didn't know was there which was nice.  At about 3 we called it a day as we were all flagging a bit.  We had done quite a large area and Iain was very pleased with what we had all done.  We put all the tools and our bags into the vehicles and drove back to base.  This time Mick was driving the Land Rover and we followed Iain in through the exit! The things you can do when you're in a marked National Trust vehicle!  Once back we helped Iain put the tools in their store and he showed us the flail.  Then we walked across the yard to the basecamp where Matt and Lisa were busy peeling parsnips, preparing potatoes and chopping carrots.  They always have the dinner timings down to a fine art.  The rest of us enjoyed a warming drink of mulled wine and a mince pie.  Some went for a shower which I would just like to take a moment to praise as they were brilliant - lovely and hot.  You can never be too sure what base camp showers are going to be like.  Mick and Pip went out to see the big house lit up.  A trail through the servants' quarters and tunnels had Christmassy lighting and decorative pieces.  At 6pm we sat down in our Christmas kitchen.  The table was covered in delicious food which was devoured by all.

Pudding was a sticky toffee pudding which I did not have because much as I love a good pudding I didn't think I would have been able to move afterwards!  After we had cleared the table and washed up the pots we moved ourselves into the comfy chairs and it was time for Secret Santa.  Before this took place I presented Matt with his 10 years service certificate and badge.  Well done Matt!

Santa then gave us all our secret presents and we did the Christmas Quiz that Lisa had written for us.  The funniest answer came from Team Pick & Mix.  What do you call a male turkey?  Twizzler!  The winner of the quiz ...? Matt.  Apparently he hadn't seen the questions beforehand!  After this we did play some of the games people had received in their secret Santa.  One that caused much hilarity was Pip's Mr Men and Little Miss Personality Game ... highly entertaining.  It was getting late by this time so we ventured to bed.

Sunday dawned bright and a little breezy and, as in previous years, the day was ours to do with as we wished.  Some headed home in the morning - Neil to watch his son race in a half marathon.  Did he win?  Mick, Pip, Jenny and I were not in quite such a rush so we visited the tunnels under the house (again) and the shop where many goodies were bought.  We then went for a walk round the parkland.  Excellent map reading by Mick!  Once back at base we ate our packed lunch and headed for home. 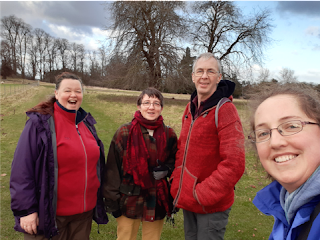 It was a fabulous weekend.  Well done to all involved.  To the rest of you ... where were you?  Next year we are travelling to Snowdonia for Christmas in Cymru.  I look forward to seeing you there.