Ten of us turned up at Quarry Bank on what had promised to be a very wet day, fortunately the forecasters got it wrong and it only rained for a short while as we were packing up, but stopped before we got back to the car park.
Colin, Quarry Bank head ranger, had a task sorted for us that we could really get stuck into. Working in Chapel Wood removing all the holly bushes and trees as well as crown lifting the other trees. This is to give the native British and some more exotic trees, light, air and space, as they are wanting to bring the wood back to its former glory, to a time when it was lawned underneath the trees. Maybe it won't be a lawn but at least grass will be able to grow. In the future they will coppice the hedges and put in new fencing in keeping with the rest of the site.
Karin worked hard getting the fire going and keeping it burning, due to very wet brash and branches that required burning. It did need a little encouragement from a leaf blower a couple of times but other than that, Neil would have been proud of her! 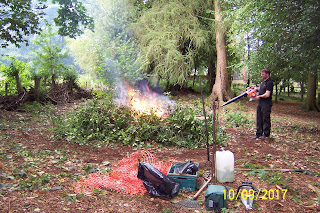 It is always nice to have new faces joining us and today we had two.  I hope I didn't put them off and we will see them again soon. 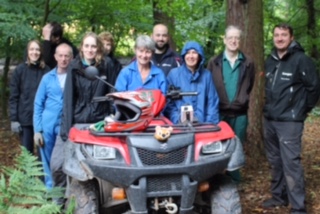 All in all a good days work was done and Colin was pleased with the difference we had made.  Apparently to be continued next week........
Text by Christine
Photo's from Karin & Adrian 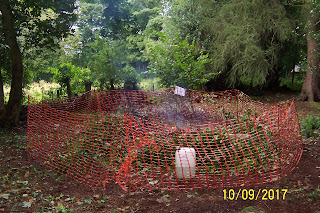