Fencing and digging at Hare Hill on Sunday 24th September 2017

Nine of us arrived at Hare Hill, not knowing what footwear to use as there were a variety of jobs put down for us.  Hallam arrived and suggested we all wore wellies, as it could be muddy.  As one person did not have them to hand he waited with Hallam to get some from the store.  This was a good move as he then had a lift in the transport while we walked down to the site.  ‘Just go over the hill towards the digger!’  As someone said later on the way up the hill, we did not notice the hill going down! 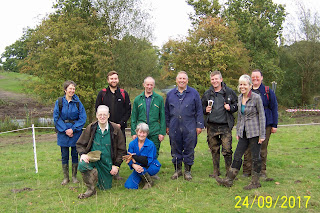 When we were all assembled, Hallam gave us the tasks, starting with taking the barbed wire fence down and putting a temporary barbed wire fence up again, to stop the cattle, if they got past a temporary electric fence, getting to the pool.  The pool had been dredged out by another digger and the pool made usable to collect all the drainage from the field.

Whilst four of us did this the other five set about starting a fire and burning off all the brash that had been taken from around the pool sides.  When all the posts for the new fence had been hammered home, and the barbed wire straightened, we stopped for some cake and drinks. (Mary Berry eat your heart out!) 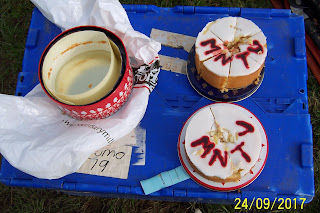 We then continued with the burning and the fencing, putting up three strands of barbed wire and discovering a hidden roll of barbed wire in the undergrowth.  Whilst this was going on three went to put back the metal fence where the digger had got access to the pool on the other side.  After a lot of digging and blacksmith skills it stood upright and did what it should do.

It was then dinner time and the burning was burning down and the fencing was finished.  After dinner we all went on to the digging out of the drains!  Some were built better than others, but were very narrow, others were just very muddy channels. 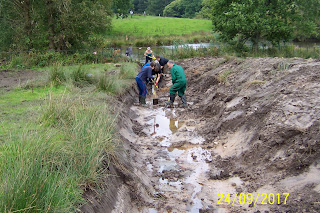 After we all enjoyed our mud bath, Hallam went to rod some drains, trying to find where the junctions of them were.  We found that the junction was 14 metres from the pool, but not sure in which direction!?  We then cleaned up the tools and made our way up the hill to home, finishing at 1530.

Neil
(Emergency leader cover only!)
Posted by Daniel Black at 13:44